Gillian is my youngest child. She's my little baby, though don't tell her that! At almost 9, she would screech if she heard herself referred to as a baby.

Last Spring, Gillian's teacher approached me about some things she had seen in the classroom with Gilly that she felt looked a lot like Asperger's Syndrome. Her school used to be where the Autistic children in the district went- it was a mainstream school, but they have a Autistic Spectrum Teacher on staff, a special class room for helping them, and a lot of other resources.

We agreed to have Gillian tested when school started back up this fall, because we've always know something was different about Gillian. She's... special, for a lack of a different word. Gillian is just different, and quirky, and loving, and wonderful, but definitely different.

We just got the final word on the testing today- the school found that after extensive testing, which included Speech Therapy testing, physical therapy, observation periods, and much more, that Gillian does shows enough signs of Asperger's Syndrome to qualify for a diagnosis.

On Friday, we go in and sign her IEP, and go over what support will be put into place to help Gillian be as successful as she can be in school.

Gillian has know from the first moment why they were testing her, and what Asperger's is. I told her today what the school decided, and she asked if that was a bad thing. I told her it wasn't bad, that it just makes her special, and that it means that she'll have more help in school, and let other people help understand her better. 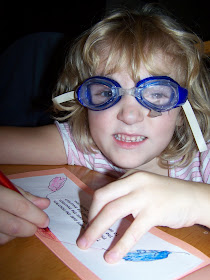 These two photos are two of my absolute favorite pictures of Gillian, because they show who she is. Gillian is just quirky, and isn't scared to be different, or march to the beat of her own drum. 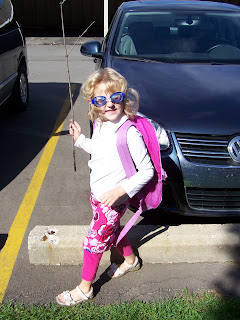 It helps having a diagnosis. It doesn't change who Gillian is, but it can help other people understand her more.
Expressions by Heather at 10:18 PM
Share

Thank you so much for commenting! I love hearing from people, and hearing their tips as well!