A few weeks ago, my husband and I decided that it was time for me to invest in a brand new DSLR camera. I had one, but it was 2nd hand, and I was never real comfortable with it. The camera arrived last week, and today, I got out of the house in this gorgeous Spring weather with Raegan to test it out.

I picked out the Sony A33, which I got with a 50mm portrait lens, and a 75-300mm zoom lens. I also was spoiled this week- I got new filters, a tripod, a spare battery, and a remote in the mail, courtesy of my loving hubby.

I -love- this camera. My main complaints: the battery SUCKS. It drains super fast, so I'm glad I have a spare, because if I have a big shoot, I'll need it. Next, a 2gig memory card is eaten up in no time at all. Now granted, I am currently set to take photos in both JPG and RAW, but still, I only get a little less than 100 photos before it's gone.

All that said, I am in love.  Here are some photos I took today of Raegan, who will be 15 next month. 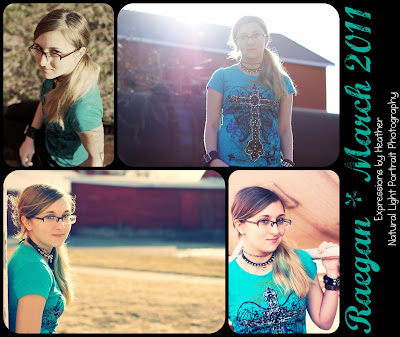 Posted by Expressions by Heather at 7:18 PM 3 comments:

Kids, points, and the first week

Overall, the week has gone fairly well. The past few days have gone pretty much the same as the few before it, so I won't break it down by day.

The kids are staying fairly consistant with points- the really are trying to behave better so they do not lose points, but they really are not stepping up to do things that can earn them extra points, either. I hope that in time, i will see them doing things like picking up after themselves, and helping each other.

This week, or federal taxes came back, after frustration and delays. I am so glad to have it back, though it really only went towards catching up bills, and doing a tad bit of splurging.

I have also been spending time getting hair things made. On the 26th, my friend C and I have a vendors booth rented out at a Mom 2 Mom sale. We are hoping it will bring a lot of sales, as we have some neat items waiting, like tutus, flowers, headbands, bows, and more, and all at nice, low prices.

I am also planning our summer vacation. I got my husband to settle on a date, because for the first time, he will be joining us for the entire vacation, short though it may be. With his work schedule, he rarely likes to take time off all at once, let alone most of a week, but i convinced him to this time.

We settled on going to Mackinaw City. I took the kids up there two summers ago all alone, and loved the area, but the stress of having two high maintance kids and a newly minted teenager was a bit much to do alone. This year, we made a few changes- no tent, instead, we ar renting a cabin at a camp ground. Small, but with 4 beds, a table inside, a mini fridge, and a microwave even.

Last time, i was all for campfire cooking, but that campground does not have actual fire pits. Instead, they have tiny, dinner pplate sized fire "pans" to build your fire in. Makes for a tiny, very hard to build and keep goiing fire. I made a lot of sandwiches last time.

Now that we have dates in mind, and know where we are going and what we are going to be doing, i am able to start the hard part- budgetting and saving money.

All of the money from my mom 2 mom sale will br going towards this. All of my online earnings (or, ehat i don't use to buy more supplies) is also being funneled into the savings. I also started a change jar. At the end of the day, all change or $1 bills in my purse and pockets goes into the jar. I did have about $12 in change built up from just tossing it in a cup on my bedside table, but now that i am actively saving, i have just about $40 saved up.

I figured with a generous gas budget and food budget, plus entry fees, campground fees, and spending money, we can do it with about $800. I know that seems high, but that allows us to do a lot of tourist things- going to the isle alone will cost just about $80, plus a $65 family pass to the various historical parks.

And last but not leat... I got a brand new DSLR camera- i love it! It gives me more confidance in my portraits, which is another source of income. Plus, yesterday, Nick surprised me by picking up an extra battery, a set of filters, a tripod, and a remote to take photos with while being in them. My goal is to do our first ever full family portrait hhis summer when we are in Mackinaw City. I want to do some with the bridge in the bwckground. I think thwt will make for some fun portraits.
Posted by Expressions by Heather at 6:15 AM 1 comment:

Today was a bit more rough than yesterday, though it was still fairly tame all things considered. Overall, though, I do like the point system.
Some quick background- I have insomnia. My particular type means that I can't fall asleep easily. Once I'm asleep, I'll remain asleep until my body is ready to wake up, but it usually means catching up on sleep during the day. It usually works out that once or twice a week, I'm napping when the kids get home- they're used to this, and old enough not to need direct supervision.
Today was just such a day. I was woken up by Chris fighting with Gillian. I asked them to stop as I tried waking up, but Chris was having a stubborn moment, and as such, was not really ready to listen to me.
After hearing him nag at Gillian for another few minutes more (due to whether or not she was actively doing her chores- this is something on our list of things we want to correct, as he spends a LOT of time, energy, and our patience in worrying about what the girls are doing), I finally told him he lost a point. He settled down shortly after that as I got out of bed.
I was surprised to see all 3 kids working at their chores, though, when I woke up. Chris was done, though to be honest, not really done. I've got him finishing up right now, as he had to do a load of laundry (all 3 kids know how to do laundry now, and it is on their chores, twice a week they each are responsible for doing their own laundry).
Raegan did her dishes fairly fast, and she also had to dry & put them away (every other day of the week, it falls so that 1 kid does the washing, and 1 kid does the drying and putting away, but there are only 2 kids doing dishes, and 3 doing the putting away, so it landed with Rae doing both today). On top of that, it was also her chore to clean off the counters- throw stuff away, put stuff away, and wash them off.
It's become habit in our house to ignore one entire corner of the kitchen counter. We have an L shaped counter, and the corner area is home to the coffee pot, can opener, coffee cans, container of utensils (spatulas, slotted spoons, etc), and the dish strainer. Unfortunatly, stuff gets shoved back there, and left. Every time.
It irks me, because it makes the entire kitchen look horrible, and yet, no one ever just picks stuff up. Even my husband ALWAYS leaves the griddle sitting there (we use it maybe once every 2 weeks). So while we were making dinner, I had Raegan come back out, and start that area.
It upset her, but it IS a chore that needs to be done, and if it's done several times a week, the "stuff" won't build up back there.
So, neither Chris nor Rae finished on time tonight, and with both of them, it was because they "forgot" to do part of their chores. Both "forgotten" parts are things they always "forget" so they don't have to do them. But, I am trying to get them all to be more responsible in their jobs around the house, including doing their chores completely.
Here's hoping!
So far, Chris is at 4 points, Gillian is at 6, and Rae is at 5, though she may lose one if she doesn't finish her chore tonight. I had told her when I first noticed it that I wouldn't hold it against her if she got it done. That was an hour ago- since then, she has taken over 45 minutes to eat a bowl of spaghetti, so she can avoid doing it. It's her evasive maneuver. Avoid notice by being out of site, or claim she is still eating so she can't be asked to do it. I told her at the start of this post that she had 5 minutes, which by now, were up 3 minutes ago.
Posted by Expressions by Heather at 8:40 PM 2 comments:

Well, yesterday was Day 1 on the new Behavior Point Chart. To coincide with it, we also modified the chore chart to add in things that don't get done, and take off things that didn't need to be done as often as they were. Last summer, Chris went to Florida with my FIL for most of the summer, and that was the last time I re-did the chart. Chris didn't have assigned chores, we just found things for him to do. Now, they are all on the chart.

Overall, it went good. Raegan did try to sneak off and hide in her room, under the guise of changing out of jeans into sweats. After calling her down 2 separate times over a 25 minute period, she finally came back down.

Gillian did her chores, though she wound up doing some wrong ones, and having to do extra to do her assigned ones.

Chris did all of his without dragging his feet, or getting upset.

I did not have to take any points away at all yesterday- the kids did not fight even once, which is a miracle in and of itself.

Here's hoping the following days go as smoothly.
Posted by Expressions by Heather at 9:15 AM No comments:

Behavior, Rewards, and Life with 3 Kids