Today, Nick and I took a drive into Lansing to do some craft supply shopping. You gotta love a man who is willing to shop for craft supplies with you, while holding the bags, and paying. Ahh.. true love!

My main goal was to just get to Hobby Lobby. We also stopped into the Dollar Tree next to it, and the Big Lots across the street, both of which yielded some supplies for very little cash. I love frugal crafts!

At Hobby Lobby, my main goal was finding some sort of wooden doo dad (technical term) to put in the middle of a picture I'm working on, similar to the monogrammed "H" picture I worked on earlier this week. It's smaller, and I wanted something different in the middle, but lacked anything on hand.

I was hoping for a Fleur De Lis, but alas, did not find any. Instead, I found a little wooden medallion thing that is similar in shape to a Fleur, but isn't. I also wanted to look over the scrapbook paper. 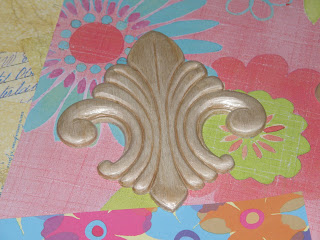 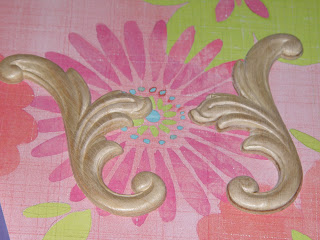 My niece, Alex, is turning 3 in April, and my sister loved the monogrammed "H" picture, and requested one for Alex in bright colors. Since I don't scrapbook, I only get paper when I have an idea of what I want to make, and because it's been mostly Christmas and house items, I had nothing in bright colors.

I found 2 pretty bright colored flower paper, then I saw some nice antiqued looking paper with old letters on it. I picked up 2 of those to use on the wooden cigar box I found at Goodwill yesterday. I can't wait to work on it! 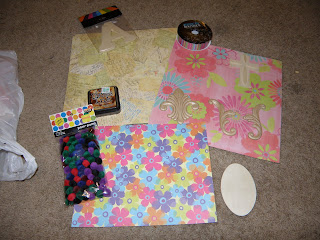 I picked up a 2 pack of wooden letter "A"s, a wooden cross, and an oval medallion to put the cross on. I also picked up a Distress Ink pad, since so many people use them. I found, though, that while it's supposed to be easier to use, it really is just a regular ink pad, simply raised up. I thought it would have some sort of pattern on it for distressing. Anyway, it was 40% off, so not a horrible buy. Oh, and ribbon! I found some cute, bright colored striped grosgrain, which I'll use to make a banner for my niece's birthday- 50% off! 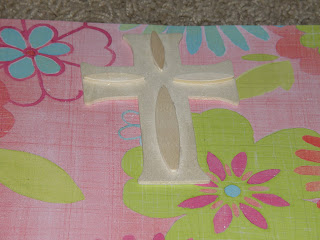 Next, we stopped at Dollar Tree, where I just wanted to look around a bit. I did find some things, though. I picked up a 10-pack of flower shaped wooden shapes, a 7-section shadow box, 2 "pictures" (which will be sanded down, mod podged with paper, and made into 1 "A" sign), plus 2 letter "H" wooden shapes, marked down to $.50 each. I forgot to get the shadow box in the photo. 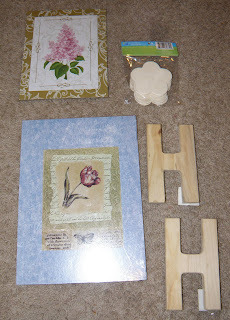 What I'll do is layer the smaller picture ontop of the larger one for the "A" sign. The big one already has some pretty light aqua sheer ribbon to hang it from, too! 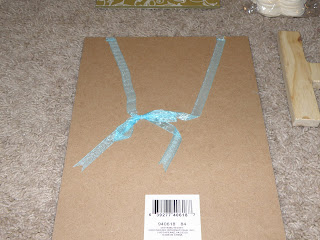 At Big Lots, I wasn't doing much looking, but found a great deal- scrapbooking kits for $2 each! They each had 8 sheets of 12x12, and an assortment of embellishments, plus some letter shaped post-it notes. I also grabbed 4 small spools of decorative ribbon. One is lavender and says "Heaven Sent" on it, with stars. One is white and says "Father's Day" on it. One is lavender canvas ribbon, and the last is wired, sheer lavender & green gingham ribbon. The ribbon was only $.75 each for 2 yards. 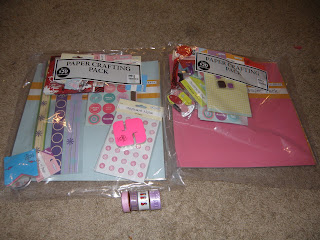 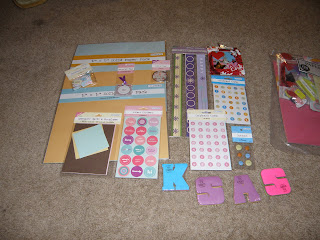 This is 1 kit opened up- 2 chipboard alphabets, 1 accent stickers, 1 6pack of boarder art, some chipboard tags, sticky buttons, card kit, and more. LOTS of stuff for only $2! 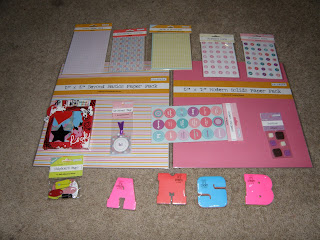 This is kit 2- similar items, but some differences. Accent paper instead of boarders, different colored chipboard tags, 1 different chipboard alphabet, different buttons, and 1 of the 4-packs of paper is patterned instead of all solids.
All in all, I got 16 sheets of paper- 12 are solid colors (with some duplicates), and 4 are patterned. 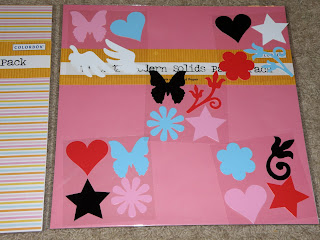 Both kits came with a 20 count pack of stickers, but they are cardstock stickers. Both sets were identical, with the stickers shown above. 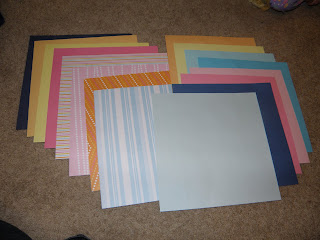 All of the paper from the packs. I love having some solids to work with, since I rarely buy solid colors. 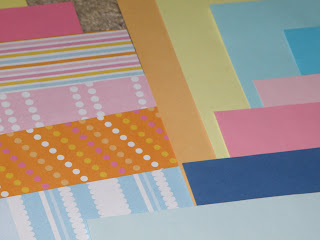 Some of them upclose.
It was nice getting out of the house, though my bottom is really sore now. It's been doing really well, but I've noticed on the days I'm active, especially if I have to stand up a lot, my tailbone gets REALLY sore. Tomorrow, we're planning to start putting the Christmas stuff away. I know, I should have already. Honestly, though, there have been times the tree was still up just before Valentine's Day.
It would have gotten taken down before now, but the weekend we planned to was just 2 days after I broke my tailbone, so alas, it did not happen.
If we can haul rear on getting it all down tomorrow, and put away, then I want to do some crafting. On my block for this week:
I hope I can get to all of it, but I'll be happy if I can even get 2 of the projects done. With the ALEX banner, I am planning to try and make felt flowers instead of felt hearts, but I'm SO not good at free handing flower shapes. The wooden flowers I picked up will help with that, though.

As for the shapes themselves, I plan to add at least 1 to the "A" sign I make.

I hope everyone is having a great weekend!

Oh, and on a final note... I was amazed and flattered to find out that I've been featured on 4 sites since yesterday.

Much thanks to all 4 sites! Your links are available on my side bar, so I hope to be able to send some new viewers your ways!!

Posted by Expressions by Heather at 9:47 PM

Sounds like you had a busy day. I will have to check out our Big Lots. I never thought to see what they had for crafting things.

I tend to look at just about any general merchendise store I go to, because you just never know what cool things you might find- and for buckets cheaper than a craft store!