Last week, I made my first trip to Goodwill in several weeks. I'm able to drive for short distances again, so that makes it much easier to get around! While I was in there, I found some "trash" that I wanted to turn into "treasure" with paint, scrapbook paper, and mod podge.

Here's the first finished item- a wall hanging. I haven't decided if it will be for my dining room or my bedroom, since both rooms are done (or will be) in the same shades. 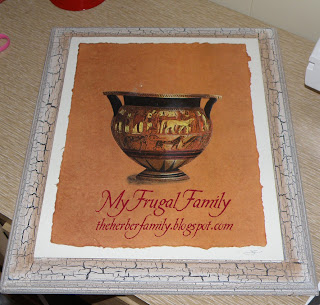 First, I taped part of the frame work off. The picture is all in one- it looks like a frame, but it's all just 1 piece. I liked the crackle paint, so I wanted some of that to remain, and thus, taped it off. I then sanded the surface down so the paint would adhere better. 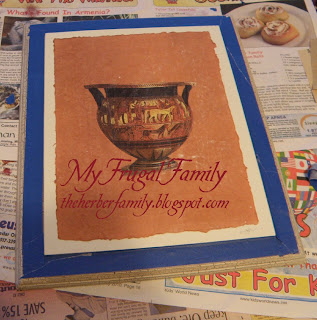 I spray painted the very edges and the main picture surface, which I forgot to take a photo of. The design underneath showed through still, but that was all right. It looked nice on the crackle area, too.

After it was painted, I removed the paint tape, and dry brushed black acrylic paint onto the surface where I hadn't painted. I had forgotten to sand this part down, though, so the paint didn't stick real well. I wound up wiping most of it off to give it a more glazed like effect. 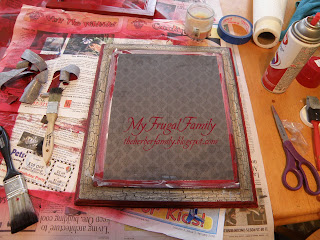 I also wound up adding some around the edges that were painted red, which gave it a nice effect.

While this dried, I sprayed the letter H red. While that dried, I cut out the black scrapbook paper I had chosen, and mod podged it to the surface of the picture. 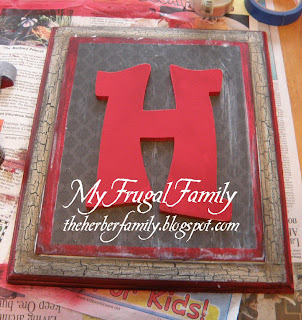 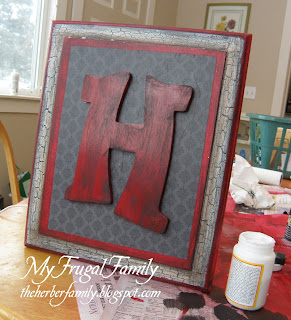 It's a large piece, standing probably 16x20, and it cost me $4 to create! This will be the large center piece to whatever wall it goes on, with a pair of candle holders I also painted today going on either side of it. I can't wait to redecorate the rooms so I can add these to one of them!

From Trash To Treasure:

This post is linked up at the link parties listed here.
Don't forget, today is Tuesday, so link up with my Talented Tuesday Link Party!!
Posted by Expressions by Heather at 10:48 AM

How fun! I'm just barely trying my hand at mod podge and all the sudden I wanna mod podge everything I see. LOL
Glad to hear you're feeling well enough to get out and get inspired.

I started mod podging at Christmas, and can't get enough of it! It's so easy to do, and with all the awesome scrapbook paper available, it's just too easy to find the perfect project!

I am doing a lot better, though driving for long distances is not an option. We drove 70 minutes each way on Saturday to a birthday party for the kids, and man, my body was screaming at me by the time we were halfway home.

You've been busy Heather. I love everything!

I am thinking about the mod podge, so many cute ideas.

HobLob has all the letters of the alphabet, in several different fonts. Some are wooden, some are paper mache.

This one actually was 'finished' with a white finish for $2.99 normally, 50% off last week. I picked up and put down 5 different H's before settling on this one. Each one I picked up, I put down when I saw the next ;)

Stephanie Lynn @Under the Table and Dreaming said...

This is awesome! I love everything about it from the color to the finish! Great job!

That turned out so fun. I wish there was a Hobby Lobby somewhere nearby me.

Kim- I know Michaels sells letters as well, and some Walmart's do, too.

What a great project.

This is an excellent project. I would have never thought about taping off the outside edge and mod podging the middle. I am going to be looking for a picture like this:) I also love my mod podge.

Have a great week.

Hi Heather-
Thanks for the comment on my blog about my desk chair. You could still cover yours. I have covered the chairs with the plastic backs. Check out my post a bit later and I will take a photo and add it to the post with a few directions. I say never say never. I went to my local Goodwill today, but didn't find any good deals. Love your deal and what you did to transform it. I had already entered a post on our link party today, but I added the chair post to. Thanks for hosting it.
Diane @ InMyOwnStyle.com

Awesome re-do! Thanks for sharing!

This is a great idea! I am so excited about your blog!!! I am glad that I found it!

Awesome, I love it! Love the colors. It will be a great statement piece on your wall.

Love the sign/picture! LOL. My initial, hmmm, that would look good in my house!! Great job!

My project this week was really similar. I spent $4 on my tray, but other than that I think I got all my stuff at the same place you did and paid about as much. Don't you love inexpensive decor! Great job.:)

My project was similar to yours and I paid just about as little as you did. Don't you love inexpensive decor!:)

very cute, i love anything personalized with letter!!

totally cute, i love how it turned out!

Thank you so much everyone! I love how this turned out, and can't wait to make more things similar to this for my room re-do!

Very cute! The H is darling!

Great transformation! The after is definitely WOW!

Leigh of Tales from Bloggeritaville said...

Now THAT is COOL!
Great work!


Thanks for linking up to Thrifty Thursday!

That turned out great!

Thanks for joining my party Get your craft on Thurs. I hope you join me next week. Mr. Linky disappeared for a while tonight I thought I lost all of my guest, but it finally came back. I will not be using Mr. Linky anymore!

Love this! I'll be featuring it on Sumo's Sweet Stuff!

Thanks for linking up!

Love all things monogrammed... Thanks for joining the Power of Paint Party (POPP).

THANK YOU SOOOOO MUCH! I work for a campus ministry called Chi Alpha and we have a house of 8 girls. Instead of the "H," I did an XA and I modge podged pages from an old dictionary instead of scrapbook paper...I LOVE THE WAY IT TURNED OUT!!! THANK YOU!!!!

Oh my goodness...I LOVE this! I never thought about searching for home items at our local Goodwill. Thansk for the idea!!

You can visit my DIY project here...
http://bethouaknight.blogspot.com/2010/01/no-more-of-loo.html

That turned out great, Katie! Thanks for showing me!

It turned out fabuolous. I am adding it to my favs.

so cute, love the colors too!

That is so fun to take something from blah to fab by being creative and thrifty. Nice job!
Cindy at Lakewood

What a great idea! Thanks for sharing with Made it Monday! Jules