This is a project I did when I was still spending most of the day laid up in bed. After Christmas, when Dollar Tree marked their Christmas items down to $.25, I picked up 4 bright red placemats. I picked up 4 because I was on a budget, and wanted to spend in even dollar amounts. I did not, in all my infinite wisdom, pick up on the subtle fact that we have 5 people in the family.

Because I was laid up at the time, I did not get back to DT for almost 2 weeks, and when I went, they still had Christmas stuff out, but were out of the red placemats. I did pick up 5 of the same placemat in white, though, for Easter.

Anyway, because I was in bed, there are no tutorial pictures, but it's easy enough. 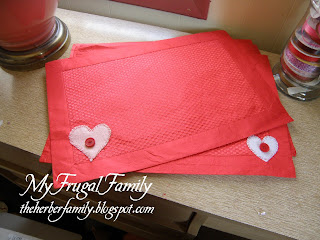 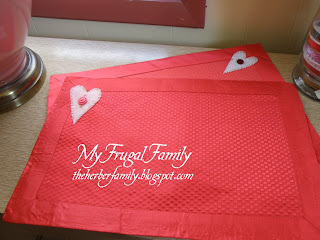 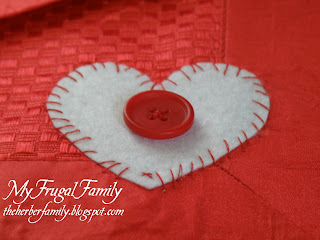 Ta da! 3 easy steps, and you're done! I would estimate start to finish, it took me about 15 minutes per placemat, once I figured out what I wanted to do with them. 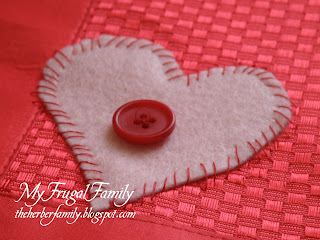 Total cost would depend on your On-Hand items. I had everything on hand once I decided to make these. I didn't have anyhting in mind for the placemats specifically when I picked them up, though. Breaking down the costs (cause, let's face it, you buy the supplies at some point, whether they are on hand or not), though, I spent $1 on 4 placemats. Thread- $1.99 for 1 roll, but I used very little. Buttons were bought in a big container for $4.99, probably close to 500 of them. So, a penny per button- $.04 for the buttons. 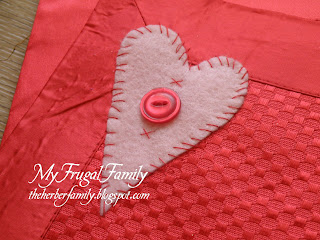 I had thought about adding some ribbon trim hand sewn on in loops and ruffles in the corners where the hearts were, but opted not to. Being 4 of them, I put the hearts in a different corner for each one. I did 2 pink and 2 white hearts, and used red thread on them. 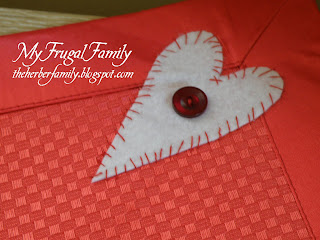 Now, for something kind of funny... I have a red velvet (ish) stocking hanging above my desk. It's been there since probably late October, early November. I tend to forget it's there. Today, I did some much needed tidying around the desk, and saw a few picks I bought after Christmas at 90% off- all of them are in pinks, lavendars, and reds for Valentine's Day. Well, haven't come up with a use yet, so I decided to put the stocking to work as storage. I think it turned out cute: 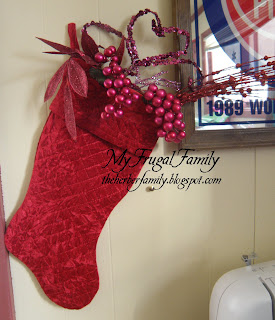 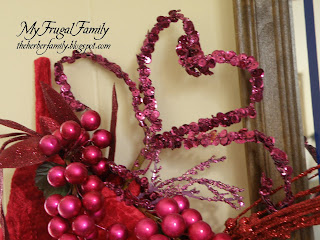 Have a FANTASTIC weekend, everyone!!
This post is linked up at the link parties listed here.
Check back on Tuesday to link up with Talented Tuesdays at My Frugal Family!
Posted by Expressions by Heather at 10:52 AM

the placemats came out soooooo cute!!!

the placemats are SO cute, and better (& cheaper) than anything I've seen in the store yet! Love your stocking storage too! too funny

The placemats turned out great!

Thanks for joining my party! get your g=craft on Thurs. Please be sure to come by next Thursday for another party!

I really would like to make these place mats. They are beautiful. Doylene

Those turned out so cute. I love the little hearts with the button. Thanks for sharing this idea.

I have the pleasure of passing on to you the Sunshine Blog Award from my blog www.basketmasterweavings.blogspot.com
Thank you for all the wonderful and creative ideas and inspiration you give us. I really enjoy reading your posts.
Nancy

Ooooh! Cute and simple! Two of my favorite things! Thanks for sharing. I've posted a link.

I love how these turned out. Very, very cute!

love your placemats. inexpesive, cute and so simple - yet it looks store bought. Very lovely!

~ Emily N. from "too Blessed to Stress"

what a great little touch...cute stockings too with the heart shape garland

This is such a great idea!! They are so cute. I love the hand stitching.

I do the same thing. I buy 4 placemats and there are 6 of us. My table only seats 4 but we pull up chairs when the whole family is here (2 sons live away). My mind works in even numbers too, just not the right ones! lol!!

Very special. Thanks for sharing with Made it Monday! Jules

I'll have to share your stocking idea with my mom since she still has her christmas tree up!! :)

Your placemats are so charming! You did a beautiful job!

oh, super cute ideas! i love the placemats- this is a perfect idea for some bright red placemats I got before christmas that actually looked to brigh for our decor and we went with a sage-like green instead. I'm heading to WalMart tomorrow- thanks for the idea!!


Also LOVE the reuse of Stockings- it looks so cute and unexpected and whata way to get your money's worth out of seasonal items!!!!


Great job- one of the best links I've seen yet!


ps. if you like activites that cost little or no money to do with your kids- check out my FUN THINGS TO DO WITH KIDS catagorie on my sidebar- most of my posts are free if not cheap ideas !!!!!