Yesterday, after dropping off prints for a client, I stopped at a thrift store I rarely get a chance to go into. The store is run by a local group that supports Catholic schools. The items are hit and miss. I can find something totally amazing for almost nothing, or something all right for a fortune. I have almost never had luck with clothing there.

When I walked in yetsterday, I saw this fantastic set of three large cubes. I thought they would be great for a photography prop, but at $20 for the set of 3, it was out of my budget. Plus, they weren't blocks like I was hoping, but crates.

Because the 4th is next week, the entire set up dead center when you walk in was devoted to Americana items (the blocks were cream with red stars on them), and red, white, or blue items. Including a totally adorable, wooden child size chair in blue. It was scrapped up a bit, but I could hardly believe my eyes when I realized it was only $2.49!

I snatched it up, got a cart, and kept looking. I was further surprised to see that it wasn't the only one. There were 4 more peach chairs similar to it- all nice real wood, all child sized. They were all slightly different in height, and some had ladder backs, some had  just a single slat at the top of the back. My blue one, for instance, had a ladder back, but the slats were arched. 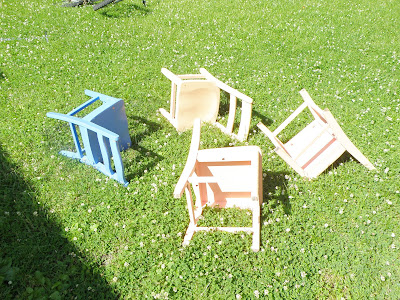 My aunt is also starting to do photography, so I called her, and asked if she wanted one, which she did. I actually ended up grabbing 4 all together, 2 for each of us. That way, we can have one in more girly colors, and one in either a neutral color, or a boyish color. 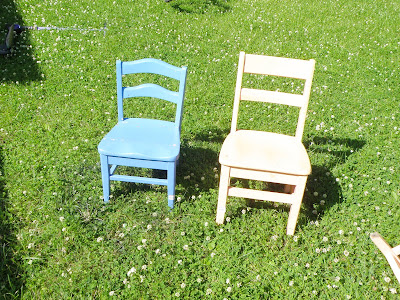 Last night, I set to sanding my two down. Only to find they were painted in LAYERS of latex paint. I mean like 4 or 5 layers. It was NOT sanding off even with my nifty electric sander. I finally gave up and decided that since kids will be sitting IN them, it's not a big deal if they are sanded out completely smooth.

I was anxious to get painting, so I headed off to Walmart to get some paint. I went with Krylon's glossy indoor/outdoor spray paint. I picked Blue Ocean Breeze for one chair, and Rich Plum for the other. 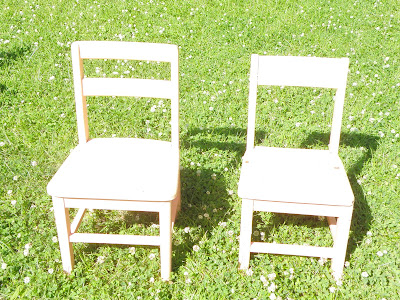 Best news? If I decide after a few shoots that I don't like the color, or want a new color, I can change it quite easily. I also plan to make two cute cushions for the top, one in zebra minky, and the other in green minky. I'll attach ties for the back, so they can be interchanged, or removed.

I used the Rich Plum color on the peach chair, and the Blue Ocean Breeze on the blue chair. I'm not sure if it was because the plum is darker, or because it's different than the peach, but it took almost a full can of paint to properly cover the peach chair, and only about half a can to cover the blue chair. In the picture below, you can still kind of see the peach, but I plan to go over it one last time tonight. 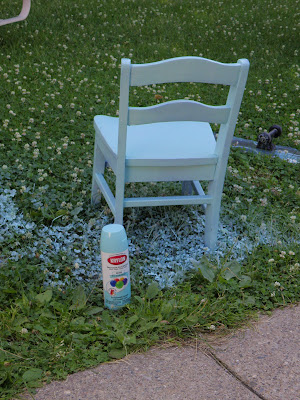 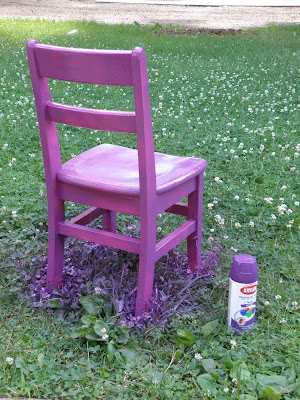 Last week, I had found another cheap prop- a velvet-ish (not real velvet) covered small foot stool with a feather boa edge, and curved legs. It's gorgeous! But, it was broken. The bottom is pressboard, and had a hole in it, but the pressboard was still there, just not attached. 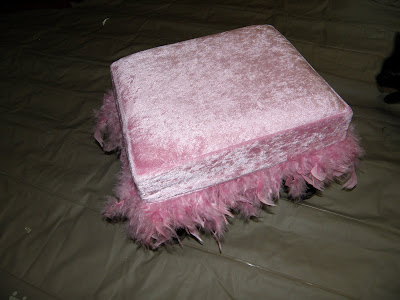 I fixed the pressboard, glued it back in, then had my dad cut a piece of plywood the right size, and attached that under the pressboard for stability.

I then sprayed the legs with Krylon's Satin black. I plan to sew a removeable slipcover for it, so it can be used for both boys or girls. I'm debating between a navy blue, or denim. I plan to get use from that stool this weekend, too! 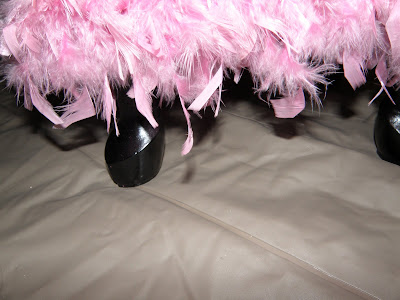 I'm so excited by all the fun props I'm finding at Goodwill lately, and for very little money. Sure, I could order a child size chair from a prop house- to the tune of $50-100. No thanks! My $2.49 chairs will do quite nicely, thank you very much! 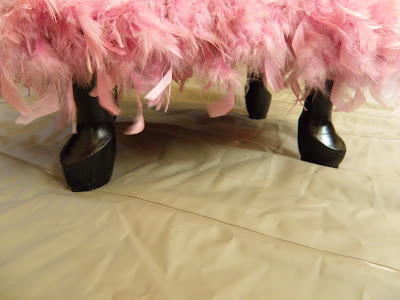 Posted by Expressions by Heather at 12:38 PM

Awesome deals! I wasn't your fault with the peach chair, peach paint is one of the hardest colors to cover. I had a peach bedroom growing up and painting over it was a beast!

What an awesome find! My kids would love those chairs. I bet the will look great in pictures.

Wicked Witch of the East said...

I love it, these chairs are soooo cute! I love really bold colors, I wish my son was little again so I could paint him some small navy and brick red chairs lol!

that does it! i am going to have to start thrifting again! love the chairs. and the krylon paint comes in so many colors.