It all started with a message on Facebook from my mom. She found some wall art she really liked, but the price was just insane. She asked me to wrap my head around it, and see what we could do to recreate it.

It was very clear to me that we could indeed do it for much cheaper than Grandin Road wanted for it.

Here's a photo of the original art work she loved. 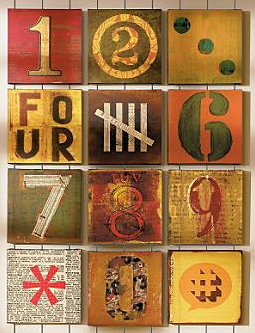 Well, it was a no brainer to me. Obviously we could do it a LOT cheaper than that, and fully customize it while we were at it!

This weekend, I drove over to her neck of the woods with my older daughter Raegan, and we got started.

You'll Need:
All in all, supply wise, we spent $12 on the canvases, and we spent roughly  $15 on scrapbook paper, with plenty left over. The buttons we found came in 3 packs, but only 1 large one per pack, so we bought 3 packs at $2.99 each. Split that down to what was used, and it was $1 per button- but this could easily be "On Hand" with buttons you have, or circles, or even just using the number 3.

We picked up the stencils for $3.50 after a 40% coupon, and they're totally reusable, so I'm not counting that as a cost necessary to this project. I had Mod Podge, but we also bought some, again with 40% coupons. I had everything else on hand that we needed. 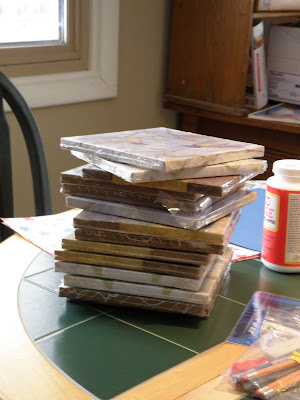 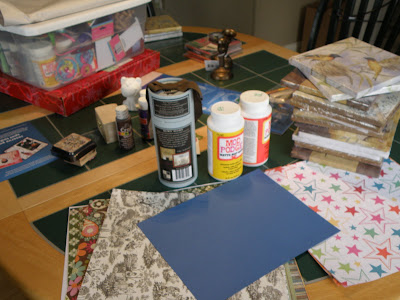 And now, for the tutorial.

All in all, I was surprised at how quickly this project went. We made 12, and granted, there were 2 of us working on it, but the entire project only took about 2 hours from start to finish.  And without further ado, some photos. 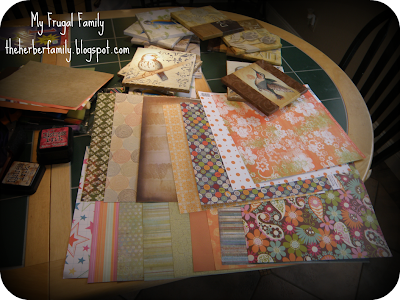 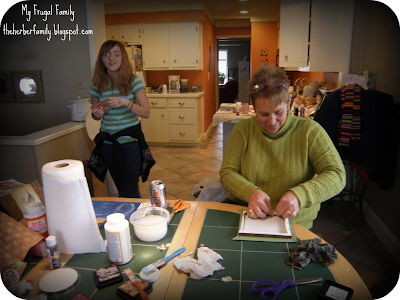 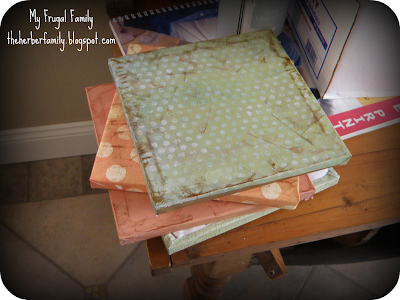 A few of the paper covered canvases 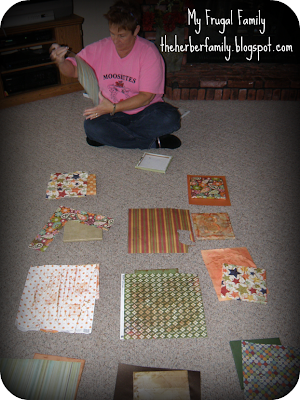 Trying to figure out/remember what papers we picked to go with which papers. Oops- this is where my stressing of doing this first came in. 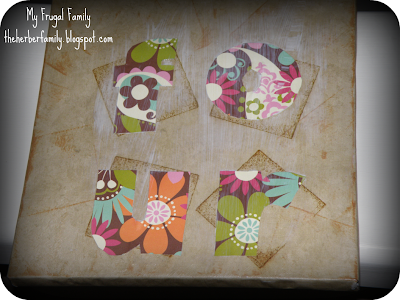 This one, we wound up going back and outlining the letters with a cranberry colored marker, because while the print stands out, the letters themselves blend in, and it was very hard to read the letters FOUR. I did not, however, get a photo of it outlined. 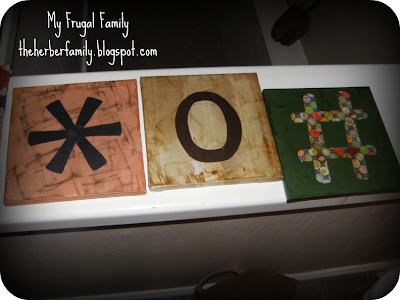 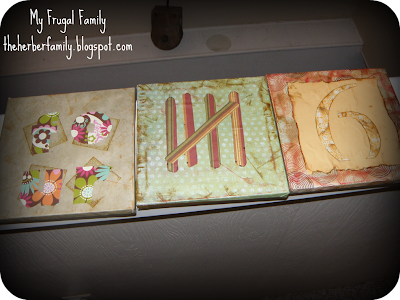 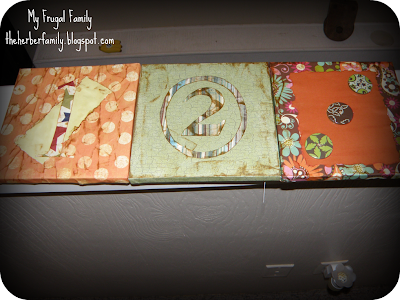 (I just LOVE the 2 with the circle around it!)
And finally... The whole thing! 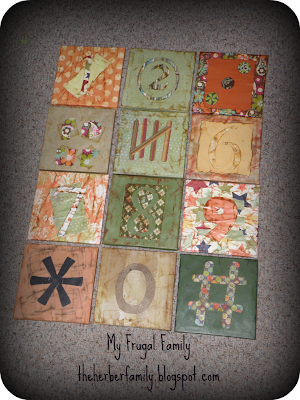 The entire project, put together- isn't it fantastic? The awesome thing about this? Well, aside from being FRUGAL? It's totally customizable when you DIY. Don't like the colors? The fonts? Want letters instead of numbers? Totally doable. It came out great, and we had a lot of fun making it!
I'm hard pressed to pick an all out favorite, because I love the entire project. And I also love that I "saved" us almost $1400 with some ingenuity and craftiness.
One last comparison:

Once my mom gets it hung, I'll get some photos of it, but I was too anxious to post this wicked awesome project to wait for them!
This post is linked up at the link parties listed here.
Posted by Expressions by Heather at 9:04 AM

Friggin Awesome Job!! And even I could do this one, limited abilities and all. Great work Heather!

founnd you via the linky when i went to see if my link worked straight after posting.
LOVE your art hack. you did a great job and for great value.

It was SUPER Easy, anyone could do this :) I love, love, love how it turned out, though, and already had another relative request one. ;)

How fun, just love it when you can DIY and save that much money.

Seriously? Why don't you have more comments...this is amazing.

You had me at Rustic. And then wall art. And then it was a done deal at Dollar Store.

Connie- it's only been posted for about an hour! I'm sure it'll get more ;)

absolutely delightful! ...I love this project. My mama was a switchboard telephone operator before we had dial phones and I adore anything telephone-y! I dropped in from Cottage Intincts and am so happy that I did. Please accept my invitation to drop in at my place one day this week. until later...

Heather, I LOVE this project!!! I love reusing ugly canvas. :) This is a fantastic idea, would look cute anywhere especially in kids' rooms. Oh, the possibilities! Thanks for sharing. :)

I love it. Great job. Thanks for sharing with Made it Monday! Jules

Great job! I agree with Brooke - oh, the possibilities!!

Very cute. Amazing how easy it is to recreate certain things isn't it?

Very creative, like yours better than original. I have an unrelated question, how do you put up your blogsite and name on your photos? I don't own photoshop, can it be done with picasa?

It is indeed amazing just how much design stores and websites over charge people! I love craft hacking :)

Holy cow! That was amazing! I love it! I can't believe how much you saved. Good job.
-Gillian

Wow! Found you over at Skip to My Lou! Just wanted to say great job!! I actually like yours better than the original :)

WOW! Great job! Just goes to show...never let money get in the way!

I like yours better than the one you copied! It looks wonderful!

The4R's- I use an online program called Picnik.com to do the editing. It's free to use!

Thank you all so much everyone. I hope it gives you all some great ideas ;)

awesome job...and yeah for your Mom too I bet she is thrilled to have you for a daughter!!

I love yours it has a little more color. Great job.

Oh My Stinkin Heck!! That is amazing! You guys did a great job, I absolutely love it!!!

You did an amazing job! I think your's looks better than the GR one!

That is great!!! It looks awesome and much better than the other one!

Very ambitious! What a great impact on a great budget. Gotta love DIY projects. Thanks for sharing!

OMYGOSH!!! HOw stinkin cute is this????? My little girl and I were at the Dollar tree yesterday and saw 3 X 3" canvas's (needing a
little help of course). I didn't pick them up because no ideas came to mind. Back there today though. I love this. Thanks

Good Job! If this was for a teen's room you could mix in some metals!
Lots of possibilities here for sure.

WOW! Awesome job on the phone pad art re-creation! It looks fantastic! Love the colors and papers you used!

Wowzers! Now THAT is some amazing work! Great idea for any room decor. DIY and match to any colors! Awesome job.

That is so impressive! FANTASTIC!

Awesome! I like your unique spin on it, very personal and well done:)

This is a fabulous piece of art! I featured this article at Dixie Pieces
http://dixiepieces.com/forum/topic/6735?replies=1#post-68016

Oh hon, you are brillant! I love it, you must have one proud Momma!

I LOVE it! I've seen the original and thought it was awesome but certainly wasn't about to dish out that much money for it. Thanks for showing it can be done on the cheap!

VERY cute! Sometimes I wonder how these companies get away with charging ridiculous prices. Clearly not everyone is as clever and frugal as YOU!

I love it and I love that you also shop at the Dollar Tree (it's one of my favorite stores!). They turned out great.
{Found you on TipJunkie}

That is so cool!! I can't believe the prices on the originals!! That's just insane! yours turned out great for a tiny fraction of the cost - way to go!

WOW! You guys did a fab job and that's a lot of cash you saved there. Love it.

You are so clever! I loved this! Joan

you did pretty good. funny how a little challange like that can inspire

Wowee!! You guys did an amazing job! Love the final look.

That's neat, I might have to try it sometime. Have they lost their minds thinking people would pay that much for some canvas #'s?

Slick! You are way too crafty. I would never have been able to dream that up. Good job!

Neat idea! The colors are great.
Win Rachael Ray bake ware at my blog.
Thanks!

Wow, I love that. I would have never taken that on. You did a great job. I love the way it turned out.
Brooke

VERY cool! and i used to be a telephone operator..., i think i NEED this on my wall!!
thanks!

LOOOVE it!!! Thanks for the tutorial and ideas. I'm a new follower, come see me sometime at sceneofthegrime.blogspot.com

Have a great, creative day!

Yours it much cuter.

This is another great reason to love ModPodge! Great job, this would be awesome with bright colors in my kids toyroom! Thank you so much for the tut!

Thank you so much everyone! This would indeed make a great piece of art in a variety of colors & patterns to match any room or existing decor.

Zebra print with hot pink is coming to mind for a fun, funky teen's room!

Thanks so much for linking up at my link up party! Please join me Friday for another party!

Awesome! I love it!

Thanks for joining Get Your Craft on Thursday. Please join me next week for another great party. Don’t forget to stop by and enter my giveaway. I’ll announce the winner at next weeks party!

That is really cool. This one is on my list. Looks like a fun family project, too!

WOW!! I like yours MUCH better than the original!! Thanks for sharing!

LOOOVVVVE it! I'd take your version... the paper and color choices.

Absolutely darling! I've always wanted a project using those little tiles... thank you for helping me think of one!!

Beth@The Stories of A to Z said...

So brilliant! Love it all. You did an amazing job!

That is totally AMAZING--FABULOUS.
This is going on my favs.

PLEASE PLEASE PRETTY PLEASE-if you haven't RE-SIGNED up to follow me at the new site PLEASE DO SO. Google doesn't let you take your followers with you so you ARE NOT getting my updates and won't until you sign up again.

Thanks for posting to the party
Cheri

Wow - that is amazing! I love it! Thanks for the tutorial!

oh my goodness you have my little wheels TURNING HARD!!! haha! It looks so great!

this is so cute, you did an awesome job! and for a much better price!
thanks for posting it on Someday Crafts!

Are they smokin' something?? $1400+!! That's highway robbery. I think your hack is Fantastic. I may just have give this a try myself.

I found you through Someday Crafts. Have a Happy Easter!

Wow, I love all your projects! If you come link them all up you would probably have a good shot at winning the prize :)
-Jill
womenwhodoitall.blogspot.com

It turned out awesome!!! I want to make me one now.

I so loved this--featuring it this week :)!

I love it. I think it looks way better than the original.
Great job! I really want to try this one.

Wow - you did a wonderful job. So cute!

Thanks for linking it up!

All I can say is WOW, you are very talented. Thanks for sharing! SUE

This is one of my favorite projects I've seen in awhile! I'm supposed to be stash-busting...buying the canvases to make these is a good way to do that, right?

This is one of the neatest pieces of art I have seen. I have featured it at Veronica's Korner. Please stop by and grab your Featured button.
http://veronicaskorner.blogspot.com

Those are wonderful! And what a cost savings! Thanks for sharing ... I've posted a link.

I stumbled onto your site - and I like your version better than the original!

Awesome!! I'm not a big 'crafter' but I love being frugal! I think your version looks like a million bucks compared to the store one!! Keep up the great work!!!